The Cosmic Pulse of Life 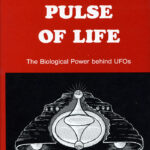 Book Title : The Cosmic Pulse of Life: The Revolutionary Biological Power Behind UFOs
Book Author : Trevor James Constable
Book Edition : Book Tree
Book Format : Paperback
Date published : 2008
Number Of Pages : 364
Book Description : This book presents evidence that UFOs are mainly invisible and consist of both physical craft and living, biological creatures. The author convincingly shows that our atmosphere is the home of huge, invisible living organisms that are sometimes confused with spacecraft when they became visible. Mr. Constable has photographed both types of UFOs with special infrared film, some of which are reproduced in this expanded and updated edition. Despite his bold leap into the future, the general public and official ufology have a hard time accepting the evidence. In recent years teams of engineers and technicians in both Italy and Romania, unaware of Constable's earlier discoveries, obtained virtually identical infrared photos of UFOs, which were published in Italy. In 1996, NASA used ultraviolet-sensitive videotape to record swarms of invisible UFOs that looked like Constable's earlier photos. Examples from these photos are also contained in this book. Also covered are earlier pioneers into important life energies that play a big role in this research, including Wilhelm Reich, Rudolf Steiner, and Dr. Ruth B. Drown. This is an important book, recommended for those interested in the higher realms of our physical reality.
Ezoterik Bilim
0.0 0 5
0 comment 0 FacebookLinkedinTumblr

The Siren Call of Hungry Ghosts

The Practical Psychic Self Defense Handbook

Handbook for the New Paradigm

Dear God, What’s Happening to Us

Guide to the Global Conspiracy