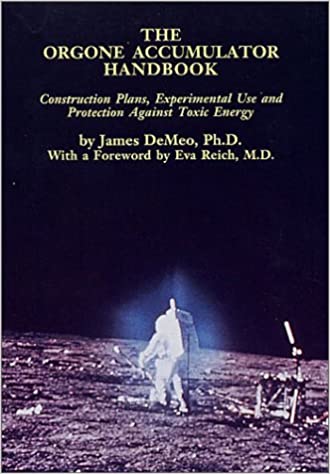 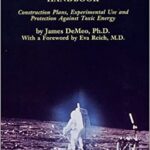 Book Title : The Orgone Accumulator Handbook: Wilhelm Reich's Life-Energy Discoveries and Healing Tools for the 21st Century, with Construction Plans
Book Author : James DeMeo
Book Edition : Natural Energy Works
Date published : 2010
Number Of Pages : 262
Book Description : In the 1940s, the physician and natural scientist Dr. Wilhelm Reich claimed discovery of a new form of energy which charged up living organisms and also existed in the open atmosphere and in high vacuum. Reich's laboratory and clinical findings indicated this new energy, which he called the orgone, could be photographed and measured, and had powerful life-positive biological effects. Reich trained other scientists and physicians in his findings, and together they set about applying the inexpensive orgone treatment methods - using a device called the orgone energy accumulator - against various illness, including cancer, with remarkably good results. His published findings shocked the scientific world of his day, however, ultimately leading to numerous smear articles in the popular press, and trumped-up charges by a power-drunk Food and Drug Administration. The FDA & "investigation" lead to a court trial of much greater significance than the better-known "Scopes Monkey Trial". Ignoring Reich's evidence and declaring "the orgone energy does not exist", US Courts ordered all books on the orgone subject to be literally banned and burned. Reich was thrown into prison, where he died. His work was nearly forgotten except by a small group of supporters. In this book, former university professor Dr. James DeMeo examines Reich's evidence and reports on his own observations and laboratory experiments, which have repeatedly confirmed the reality of the orgone phenomenon. Dr. DeMeo also recounts the observations and experiments of others, particularly physicians working in private European clinics where open use of Reich's controversial orgone energy accumulator proceeds today. This Handbook gives a warning about low-level atomic and electromagnetic radiations, as from nuclear power plants, power-line fields and cell-phones, along with advice on measurement and protection against such toxic energy. The book also gives a discussion on the subject of healing waters from natural hot springs, a form of energy medicine which once was widely used in North America before the rise of the authoritarian MD-hospital system and the powerful federal bureaucracy of the FDA. Dr. DeMeo also gives detailed construction plans for people to build their own orgone energy blankets and accumulators, which are inexpensive and simple to construct, though requiring specific direction as to their materials and environments. This is the Third Revised and Expanded 2010 Edition of the Orgone Accumulator Handbook, nearly 100 pages larger than prior editions and carrying a Foreword by Dr. Eva Reich (the daughter of Dr. Wilhelm Reich), along with many photos, diagrams and charts. It retains all the original construction plans, updated to address new issues about the best materials for orgone accumulator and blanket construction. Two Appendix documents are also included, one which summarizes a double-blind and controlled clinical experiment proving the physiological effects of the orgone accumulator on volunteer subjects in a German university, and another which details the similarities of Reich's orgone energy to the cosmic ether and "dark matter" of modern physics. This new edition also includes a section providing New Evidence on the Persecution of Reich, along with a bibliography, index and many weblinks for added information. It has many new photos and materials extracted from Dr. DeMeo's publications verifying the reality of the orgone energy, and is a must-have for all those interested in the issue of life-energy, subtle-energy or energy-medicine research. This is an excellent introduction to a major scientific discovery, organized for the educated layperson but with sufficient detail and citations to stimulate the curiosity of the open-minded physician and scientist.
Ezoterik Bilim
0.0 0 5
0 comment 0 FacebookLinkedinTumblr

The Feynman Lectures on Physics 1-2-3