The Secret of the Saucers 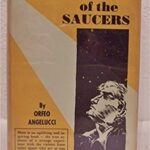 Book Title : The Secret of the Saucers
Book Author : Orfeo M. Angelucci
Book Edition : Amherst Press - Createspace
Book Format : Paperback
Date published : 1955 - 2013
Book Description : Orfeo Matthew Angelucci was one of the most unusual of the mid-1950s contactees who claimed to be in contact with extraterrestrials. Beginning in the summer of 1952, according to Angelucci in his book The Secret of the Saucers, he began to encounter flying saucers and their friendly human-appearing pilots during his drives home from the aircraft plant. These superhuman space people were handsome, often transparent and highly spiritual. Eventually Angelucci was taken in an unmanned saucer to earth orbit, where he saw a giant "mother ship" drift past a porthole. He also described having experienced a "missing time" episode and eventually remembered living for a week in the body of "space brother" Neptune, in a more evolved society on "the largest asteroid," the remains of a destroyed planet, while his usual body wandered around the aircraft plant in a daze.
Ezoterik Bilim
0.0 0 5
0 comment 0 FacebookLinkedinTumblr

The Allies of Humanity Book Three

Son of the Sun